In the 3 Par system rather than a whole disk being shown as failed you can just see individual chunklets that have done so.

I saw the following in the GUI, under System and Summary 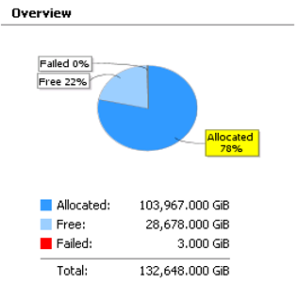 Once I had seen this I decided to proactively evacuate all the data from disk 28 so it can be removed.

Double check its running in the background

Interestingly I was told by the second HP engineer a disk is not considered failed until it has 6 failed chunklets. I would say the decision of when to proactively hotspare out a disk is down to personal discretion.