The big buzz around HPE Discover was Synergy, this is not Simon Cowells latest boyband but what HPE is describing as composable infrastructure. I wanted to write a blog post to cut through the marketing hype to understand what this product may actually do and of course how it fits in with 3PAR. 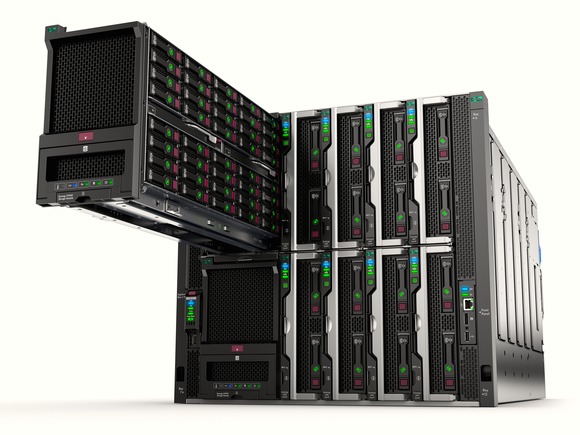 Let’s start off by taking a look at the physical product to get a feel for it.   The picture above displays a Synergy frame. Frames are essentially equivalent to a blade chassis. A frame is 10U high and will be comprised of a mix of storage and compute modules in the front with networking at the back of the unit. The mix between storage and compute can be tailored dependent on your requirements.

The picture above shows a storage module which has been pulled out, by default these storage modules act as DAS storage. The units consist of 40 hard drives which can be combined together with RAID and presented as DAS storage to the compute modules in the frame. There is no concept of chunklets like on a 3PAR, so entire drives must be added to a RAID set and presented to a single compute module. If there is a requirement for shared storage a StoreVirtual VSA utilising the disks from the storage module can be utilised. 3PAR can also be used in conjunction with Synergy and will be discussed in more detail later.

So far nothing special, it’s a smart looking blade chassis with a posh name. But 2 additional modules on the left of the frame as you look at it provide intelligence which elevates this above your average blade chassis. These are termed the OneView Composer and OneView Streamer. OneView is the software defined element that’s going to pull all these components of the system together and provide a single point of management for the Storage, Compute and Networking. The Streamer will hold images which can then be pushed out to the compute modules for rapid deployment. At this stage you are probably thinking this sounds like HPE’s interpretation of a Vblock. This would be no bad thing since EMC have proven the converged infrastructure model to be an extremely successful product.

HPE are however positioning Synergy as next gen infrastructure not just converged infrastructure like Vblock, but what they are calling composable infrastructure. Fluid resource pools which are combinations of storage, compute and networking which can be flexed up and down according to the demands of applications. The hardware is self-detecting as elements are added or removed, layered on top of this is the software defined management layer of OneView. But the real magic is the open API which allows software to interact with Synergy. It is the API that is going to allow scripting, automation and orchestration from within applications. 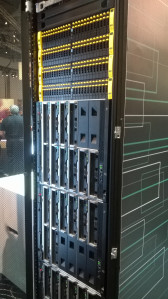 Readers of 3ParDude.com will always to be keen to see what this means for 3PAR. Well the good news is that 3PAR is already supported for external storage and is currently the only supported physical storage system. Plans are for the rest of the HPE storage portfolio XP, MSA etc. to become supported quickly.

The physical racking of the 3PAR and moment of birth config will remain. But once the system is up and running CPG’s have been created, all future tasks can be done within Synergy using OneView.

The challenge for HPE themselves may be with creating complete invisibility of the storage system that it potentially becomes perceived as a lesser important part of the solution. Customers potentially will not have the drive to move from an existing competitor’s storage system they are already happy with when the management is effectively going to be hidden by OneView anyway.

HPE is betting on the future being Hybrid cloud and announced a partnership with Microsoft Azure to enable this. The deal with AZURE creates the building blocks with which HP can offer complementary on premise solutions that still allow them to ship kit whilst giving onsite a taste of the Cloud with characteristics such as elasticity, fluid deployment and re-provision of resources

Synergy is expected to be available Q2 of 2016.