I have written a more up to date article detailing how to get the best performance out of Veeam, check it out first!

Veeam Backup and Replication V9 has been out for a little while now, this post looks at the new features of V9 and specifically those new features which require some configuration to take advantage of.

Is a new feature in V9 that works alongside compression and dedupe to further reduce the size of the backup files. BitLooker aims to exclude unneeded data from backups to reduce the backup size. It does this by excluding deleted files, swap/hibernation files and user specified exclusions.

Any new jobs you create post upgrade will be enabled with this feature by default. To enable it on already existing jobs chose to edit the backup job, choose advanced settings on the storage screen and on the storage tab you will see the new Exclude deleted files tick box. 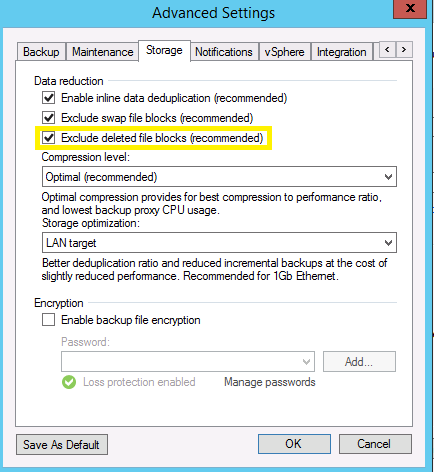 If you wish to take advantage of the new file/ folder exclusion feature edit the backup job and head to the guest processing screen, for each VM under application aware processing you can set exclusions.

The feature will work on Microsoft VM’s that use the NTFS filesystem. 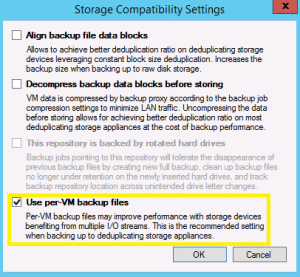 This option is configured at the repository. When you choose to edit a repository, on the repository screen choose advanced options and then tick Use per VM backup files.

Previous to version 9 if you utilised the application aware processing, the processing of this was dealt with by the Veeam backup server. In V9 you are able to specify a Windows computer such as a proxy of your choice to process the application aware job. This provides greater scale by spreading the load and allows you to specify a server in a remote site so processing is completed locally.

Scale out backup repositories are another major new feature, in short they allow you to combine multiple potentially physically separate repositories into one pool of storage. They have been covered in detail by many sources already so if you wish to read more about it check out this Veeam blog post and FAQ section.

Like backup jobs, Veeam 9 now processes copy jobs in parallel rather than in a serial fashion. This item is the exception in this post in that it is enabled by default and so no action is required.

There are plenty of great new features in Version 9 but it does strike me there is the opportunity to make the new features more accessible to ensure the greater proportion of customers are taking advantage of them. A sensible approach would seem to be to add a what’s new splash screen to the product post upgrade, similar to getting started you see in many products. This could highlight the key benefits and especially those that require a retro amendment such as BitLooker. Enabling the option could happen in one of two ways, firstly a hyperlink which would open the screen on which the option must be changed or for low risk changes an option which just set it globally to the new default for you.