I found this post lurking my drafts area, I probably should have renamed it newish commands now but the information is still relevant.

3PAR OS 3.2.1 MU2 saw the introduction of VVOLs support for 3PAR, this meant a number of additional commands were also added to the CLI:

showvvolvm – Show information about virtual machines (VVol-based) in the system.

You can read more about VVOLs in my previous post and HP’s white paper.

I had a great question in the comments last week asking what would happen in a situation where VVOLs was implemented on a system with no snapshot (virtual copy) facility licenced.  This prompted me to think it was worth while putting together a quick post around what the requirements for 3PAR and VVOLs are.

VVOLs were introduced with vSphere 6 and provide offloading of the grunt work to the storage device and a one to one relationship between VM’s and their storage.  If you need a reminder on what VVOLs are all about check out my previous post.

The above table summarises the requirements.  First and most obviously you need vSphere 6 and this needs to be licenced at vSphere Standard level. From the 3PAR side of things you need to be running 3PAR OS 3.2.1 MU2 or above, this effectively means that VVOLs are only available on the 7000 and 10,000 series models. Patch 12 for 3.2.1 is also a mandatory requirement for VVOLs, this patch ensures the consistency of the VM’s, read more in the official release notes

The 3PAR also needs to be licenced for both Virtual Copy and Thin Provisioning (part of the base OS on current models).  So going back to the original question I was asked, VVOLs will not work without a snapshot licence.

I have done several posts recently which have touched on VMware Virtual Volumes (VVOLs). Now that the dust has settled, I wanted to do a more detailed post to put all the pieces together and answer all the questions you may have about VVOLs and its function with 3PAR.

Today we take a LUN centric approach to storing VM’s in vSphere. On a 3PAR system you would create a virtual volume, then export this to your ESX hosts as a VLUN, this VLUN would then be formatted within vSphere with a VMFS file system to form a datastore. The diagram below represents the present situation, with a single LUN formatted as an VMFS datastore containing multiple VM’s. 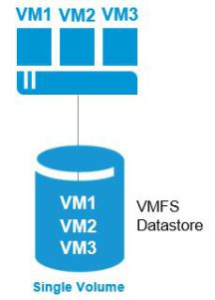 The Need for Change

This is the way we have been working for years so what’s the challenges with this LUN centric approach.

In summary today we are bound by physical limitations, management complexity and a broad approach that’s defined by the storage characteristics

So what we need is something more granular, that workers closer with the storage to expose its capabilities and allows the VM’s to define their storage requirements in a policy driven manner. Well, with the launch of vSphere 6 and VVOLs, that’s exactly what we have got.

As this is a completely new way of working with storage, let’s first understand the architecture and terminology of VVOLs. In vSphere 6 when provisioning a VM there is no need to first present the backend storage from 3PAR, just create the VM in vSphere which will then communicate utilising the VASA provider to create the necessary storage on 3PAR. VASA stands for vStorage APIs for Storage Awareness and allows the capabilities of the storage to be exposed to vSphere. When there is a storage request VASA acts as a broker between the storage and vSphere, for example when a VM says ”I want a snapshot”, the storage replies “hey take the weight off your feet good sir, allow me.”

The VVOLs created on the 3PAR have a one to one relationship with the disks created in the VM, so for example if you create a VM with 2 VMDK disks, two VVOLs will be created on the 3PAR to represent these. These VMDK VVOL’s are called data VVOLs. On top of this you also have Config, MEM, Other, and SWAP VVOL types to represent the other files that make up a VM. The diagram below shows the one to one mapping between VVOLs and VM’s. 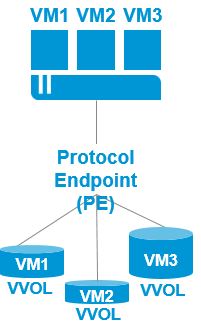 To summarise a separate container is created for each file type that makes up the VM direct on the storage as a VVOL, the VVOLs are grouped together in a storage container, communications to the VVOL is via the storage end point and the capabilities of the array are exposed via VASA. 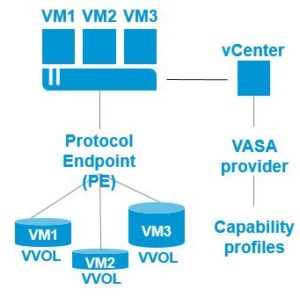 All of these features allow us to overcome the challenges we identified earlier to allow a more granular, policy driven approach with the grunt work offloaded to the storage

The good news for 3PAR owners is that HP have been working with VMware on VVOLs since day 1, the 3PAR was actually the reference device for Fibre Channel and VVOLs, so has undergone extensive testing. Whilst some vendors will require additional installs to accommodate VVOLs 3PAR has it baked into the code and will be available to all those running the 7000 and 10,000 systems with 3PAR OS 3.2.1 MU2. VVOLs are included with vSphere 6 which is expected in quarter one of 2015. To read more about how 3PAR and VVOLs will work together check this post and also this post which deals with requirements for VVOls.

The only thing I think HP will have to review is their naming convention for LUN’s. I think they are going to have to admit defeat with both themselves and now VMware using the term virtual volumes.

Eric Siebert VMware VVOLs is coming. Will your storage be ready for it? HP 3PAR StoreServ will be!

Eric Siebert Got VVOLs? If you have 3PAR StoreServ you do