One week from today (3rd February) VMware are advertising a big launch event, whilst it doesn’t specifically say its for VSphere 6 if its anything else  I’ll change my name to VNXDude. Although VSphere 6 has been in public beta for some time it has been under NDA and so information about what is in the new release has been scarce. 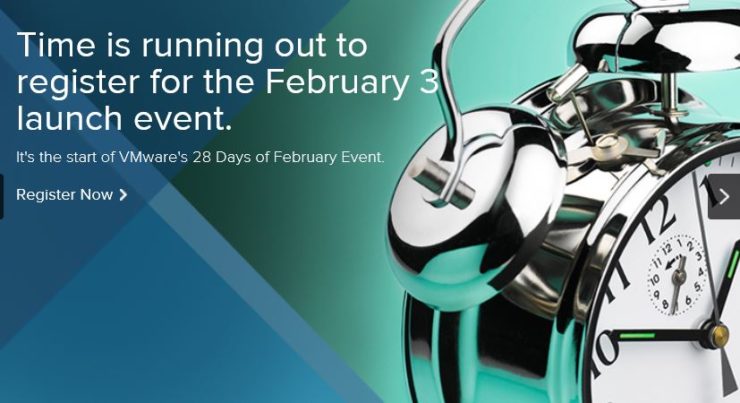 What do we know?

What has been announced in the new version of VSphere is some improvements to FT, long distance VMotion plus the introduction of VVols. The number of game changing features being added to the previous few version of VSphere appears to have slowed, with the real emphasis being on developing the eco system – NSX, VSAN and VVols i.e. the foundations of the software defined datacentre. This makes sense since we are all now used to the idea of server virtualisation, allowing us to pool compute and gain agility and flexibility with a policy driven approach, the next stage is to take this to all elements of the data centre. To get VMware embedded as the platform of choice to manage networking, storage etc. would give VMware a real strangle hold across the data centre.

If next week is indeed the launch of VSphere 6 and VVol’s come as part of that, this will be one of the biggest changes in the way storage admins have done business in some time. VVols introduce a one to one relationship between VMDK files and backend volumes on the storage array. There will be no file system as VSphere will talk directly to the array, allowing the workload to be off loaded to the storage system.  The storage system will also be able to directly expose its features such as RAID levels, replication and snapshot capabilities to VSphere, allowing the creation of policies matching VM requirements to storage capabilities. Check out this post I wrote previously if your interested in more details of VVols working with 3PAR.

To help introduce the idea of VVols I have posted links to a couple of videos on the topic. The first is a discussion on VVols from The CurrentStatus web chat and the second is a VVol deep dive from VMworld, both really interesting and well worth a watch.

I’ll bring you more news next week if I’m correct, or if not I will be busy changing the domain to VNXDude.com.

We first talked about VMware VVOLs in this post here . A further presentation was given at VMworld earlier in the week and the audio from this can be found in the HP Around the Storage Block blog post here. Today I wanted to talk about what VVOLs are and how they may change the way we work in the future.

VVOLs are essentially about closer co-operation between storage and the VMware hypervisor level. This is enabled through The VASA provider which allows the hypervisor to talk directly to the storage and vice versa.

To get a better understanding of what VVOLs are all about let’s take a look at how we do things now and how this is likely to change when we are using VVOLs.

Traditional VMware datastore management has been about pooled resources, you create your backend Virtual Volume on your 3Par and then format this as A VMFS datastore in VMware. The major drawback to this approach is the lack of granularity, you have to create datastores that meet broad performance and capacity requirements and then pool your VM’s inside them.

Where VVOLs change all this is that a separate Virtual Volume is created on the 3Par array each time you create a new VM disk in Vsphere i.e. there is a one to mapping between 3Par Virtual Volumes and VM disks. This means each VM disk can be set with unique requirements which will be met by the storage array such as performance, capacity and availability. Since each disk is a separate VV (Virtual Volume) performance monitoring and housekeeping also becomes easier.

Snapshots in VMware have traditionally worked by creating a secondary delta disk on the datastore level. The challenge here was a potential performance impact and if left unmanaged the snapshot could grow and eventually consume all the space on the datastore. With VVOLs since each VM disk is a separate VV on the 3Par the snapshots are taken at the array level, offloading the work from the hypervisor and allowing the snapshots to be stored at a different tier to production data.

Currently when QOS rules are applied at a datastore level all VMs within that datastore are affected. As VVOLs give us one VV per VM disk we can apply QOS rules at a much more granular level.

With multiple VM’s residing on a single VV troubleshooting performance issues from VM’s can be a challenge. VVOLs will simplify this allowing the performance of each individual VV to be traced plus new VMware specific command line options are planned. See below the new showvvolvm command which shows the VV’s associated with each VM. The screenshot is from the original HP presentation available here .

Interestingly the 3Par has been used as VMware’s FC reference platform and so will have been through hours of extensive testing, possibly giving it the edge over the completion.

VVOLs are expected in Vsphere 6.0 for which there is no current release date.

Vmworld 2014 is now less than 2 weeks away and its always going to be of interest to those involved with storage since storage and virtualisation have always gone hand in hand.  However this year it looks like that link between storage and virtulisation is set to become even stronger with the introduction of VMware VVOLs. We discussed VVOLs in a previous post and whilst they could be a game changer news has been thin on the ground since they were announced a couple of years ago, that all looks set to change at Vmworld 2014. Check out the video from HP below which discusses VVOL news coming to Vmworld plus the other kinds of stuff to expect: