I wanted to start a series of posts looking at 3PAR 101, a back to basics/ beginners guide to 3PAR. The perfect place to start is by looking at the 3PAR architecture, and specifically how 3PAR uses layers of abstraction to deliver a unique and flexible approach to RAID.

Let’s introduce Chunklet, as its Chunklet that enables 3PAR to have a unique architecture and enable many of its capabilities.

Things were not always so good for Chunklet, back in the day Chunklet was a bad dude with a bad attitude. He existed on a traditional storage array and since he didn’t get on with anyone he demanded a whole disk to himself. So on a traditional storage array to set up a simple RAID 5 2+1 set, you would need 3 disks, 2 data and 1 parity each of which was dedicated entirely to being part of that RAID set. This traditional and inflexible approach is shown in the diagram below:

Over time Chunklet mellowed out, he realised hey it’s good to share and instead of demanding a whole disk to himself he was happy with 1GB of any given disk. This is what happens in a 3PAR system, whenever a disk is added to the system it is divided into 1GB blocks of space called Chunklets. Prior to the 7000 and 10,000 series the chunklet size was 256MB, the reason for the increase to 1GB was to reflect the growing size of disks.

In a 3PAR system like in a traditional storage system RAID is used to combine multiple disks together but instead of using entire disks data is striped across chunklets. Let’s zoom in on a small number of disks to see how this looks.

In this simple example above we see 3 physical disks each with 4 chunklets per disk, each different colour represents membership of a different RAID 2+1 set. For example there is a yellow RAID set made up of a data chunklet from the first 2 disks and a parity chunklet from the 3rd disk, real world there would be a lot more chunklets per disk i.e. a 450 GB disk would consist of 450 chunklets. To summarise in a traditional storage system each disk is dedicated to being a member of one RAID set, by using chunklets multiple RAID sets can co-exist on the same set of physical disks.

The next logical layer down is CPG’s (Common Provisioning Groups). CPG’s are simply a number of logical disks joined together to form a contiguous space. We will cover CPG’s in part 2 of this series in detail, but for now just know CPG’s are a pool of space. Whilst CPGs have many unique features for simplicity in traditional terminology you can think of a CPG as a RAID group.

Finally we get to the building block we are able to assign to a host, Virtual Volumes. Virtual volumes (VV’s) draw their space from CPG’s and in the case of thin provisioned VV’s grow on demand and only consume space from the CPG as needed. In traditional terminology you can think of a virtual volume as a LUN.

Putting It All together

Let’s pull everything together we have looked at so far to see the complete picture – when a disk is added to the system it is subdivided into 1GB blocks called chunklets, these chunklets are arranged as rows of a RAID set to form logical disks. CPG’s (common provisioning groups) pool together the capacity of the logical disks. Virtual volumes then draw their space from the CPG and can be presented to hosts. The diagram below is taken from the HPE 3PAR best practices guide and again shows how all the different logical levels fit together but in a pictorial format. 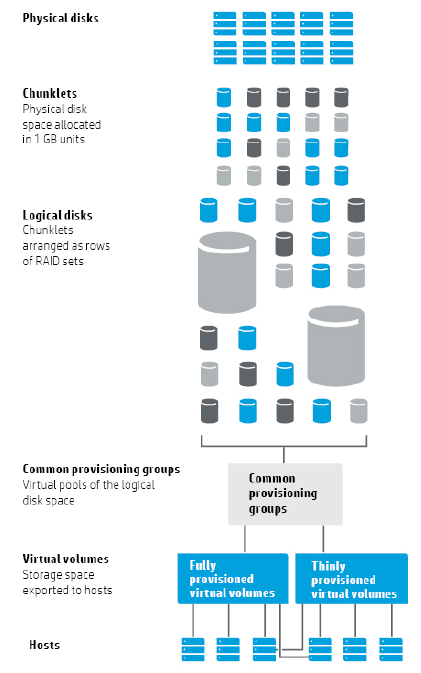 What have chunklets ever done for me?

Phew, that’s the hard bit done now let’s look at benefits chunklets give. The benefits in summary are flexibility and performance, let’s look at some examples:

This is a complicated topic but hopefully this post has helped to gain a fundamental understanding of 3PAR architecture. Continue reading this 3PAR 101 guide:

Don’t forget to keep in touch on Twitter and LinkedIn.